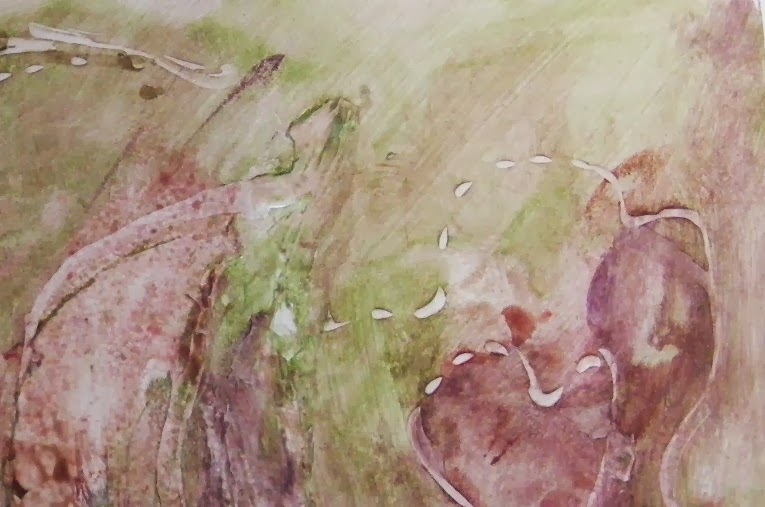 Sunday night I woke in the middle of the night...the result of dreaming a snake was chasing me at the farm.....and when I looked out and saw how bright the moon was, I realised it was the time of the Super Moon.  This is when the moon is closest to earth over our area.   Although I did discover that the event was in fact last night ..trust me to get is wrong.


Both nights  could not resist going outside in my pj's to  take photos. The first one is very clear, and don't remember what setting that was on so second one was not as good.  The moon looked much closer in reality and it was amazing to see it so close. 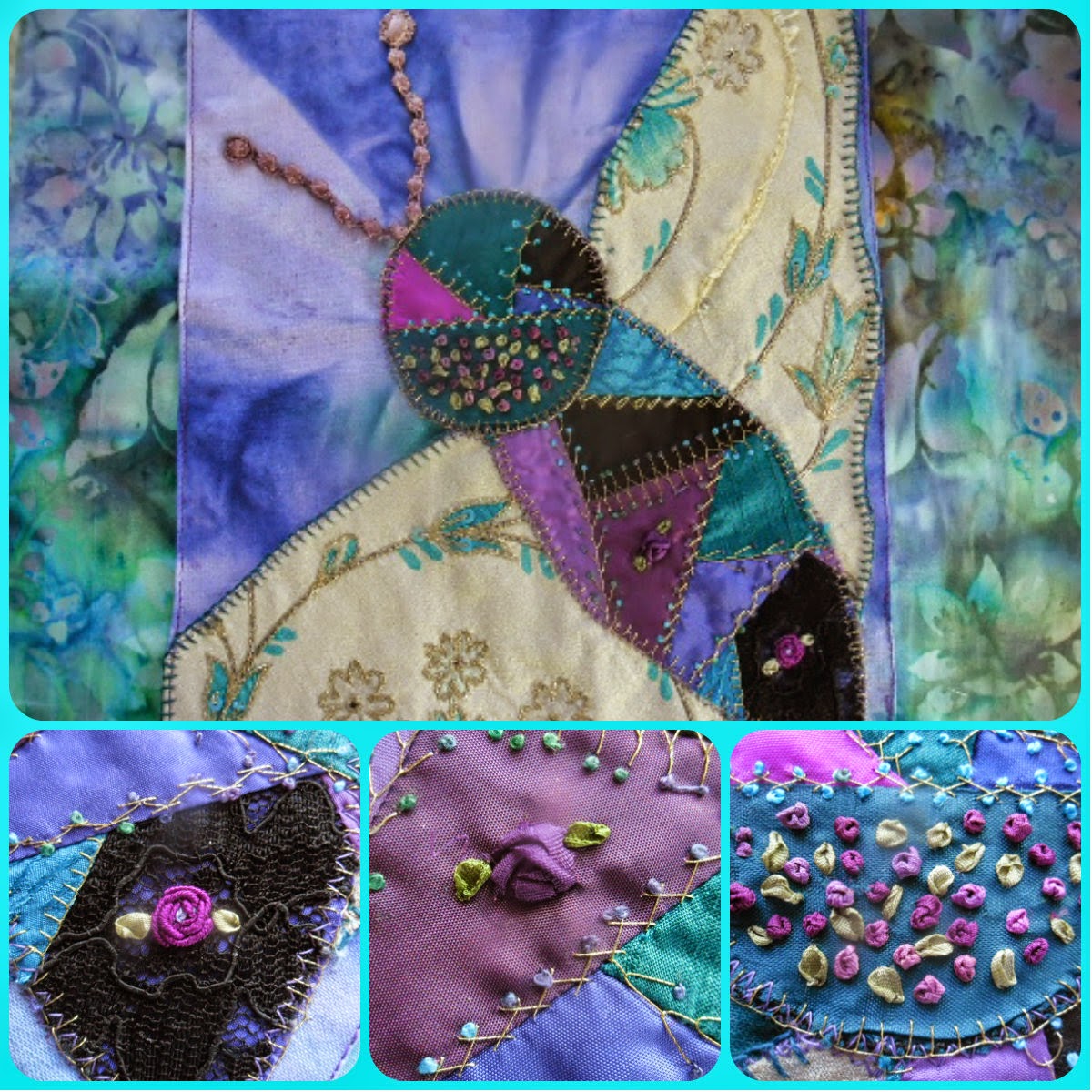 I managed to finish off this page.  The theme has a story that I wanted to include in the book as this technique played a big part in my embroidery journey.  When I first learned embroidery in 1994 I became obsessed with crazy patchwork and created a number of bears, cushions etc.   The circular piece I used for the the head of the butterfly was one of a pair that was to be made into earrings....never happened.  The body was to be added to a shirt....never happened either..... so I resurrected them for a page in the book.


The seams are stitched in gold thread. Because of the busyness of the wings I did not want to overpower the body so the three images across the bottom of the collage are closeups of the 3 embellishments I did on the head and body.  The wings fabric was left over from making a clutch bag for a bride, and the fabric was left over from her wedding dress which she gave me to keep.

Over the weekend I managed another finish. It shows a method of couching.   The design was something I created when I took part in  Sharon Boggon's journal course , where we learned about colour and design. 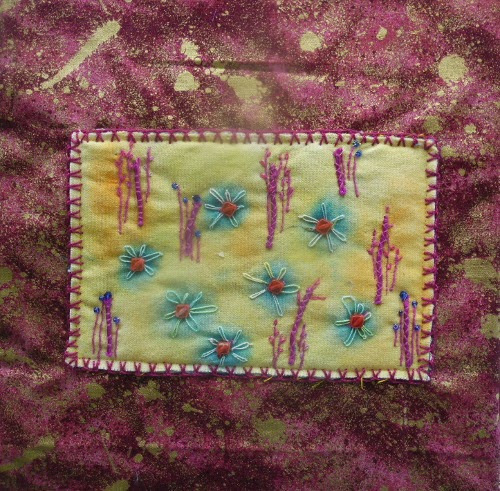 I have called it Cactus Garden.  The I used bright pink 'rats tail' which I couched with herringbone stitch.  The beads were from my stash. I might add that the postcard is really straight on the piece, but dont seem to get straight photos. 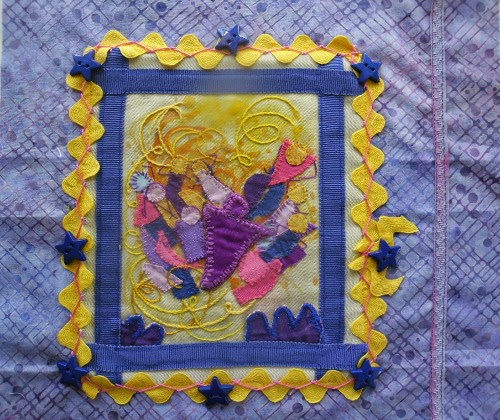 The above page also has a story, and was created for a challenge also at the beginning of my embroidery journey.

The theme was "joy" and applique was the technique to be used.  Well! the only applique I knew was commercial applique on shirts, I had never heard of Visofix, my library of embroidery techniques was non existent and I had no one I could ask.  So the above is the result.

The stitching is deplorable, but it was what it was at the time so is really significant in showing how far I have come from those early days.  I am enjoying getting all these old memories together.

I actually do still have the first bear I embroidered and display it proudly on a shelf.  But that can be a blog for another day.  The stitching is so ugly, but I love that little bear.

Posted by shirley at 11:17 AM 9 comments: Links to this post

Back From the Bush

My blog posts seem to be getting further and further apart these days.  However I am now back from another sojourn, with some pics to share.

There were some new arrivals this visit, deer in the farm paddock next door.  It was so exciting to see something different having never seen deer in real life.
It took a a while to get photos, and these are as close as I got.
The cattle like to get in the act and watch what is going on.

I did enjoy my stay, but it entailed quite a bit of housework.  Himself is having trouble with his hip and is in a lot of pain so has not been able to cope with the cleaning, particularly anything that is  low down.  By the time I left it was good to see my lovely house all spic and span again.

I didn't feel the cold up there because we had a fire every night.  Not much flowering in the garden, although I did get some pics of what is there. 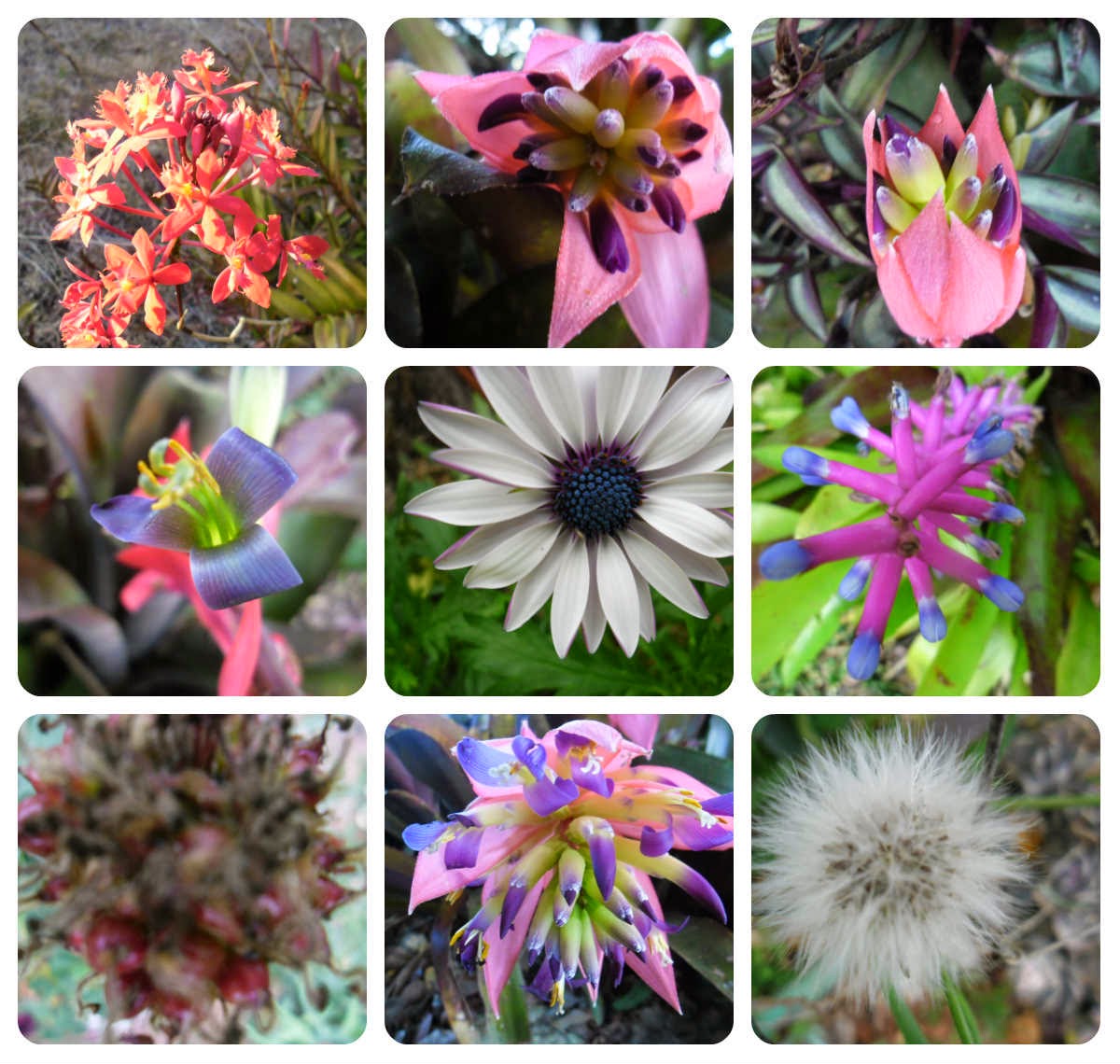 The bromelaids are almost finished but what was there was striking. There are also weeds which are on the bottom right and left. The yellow daisies are almost finished  but managed to capture one lonely flower that was left. I do love the red and pink crucifix orchids.  The white daisy has wonderful blue spots in the centre. 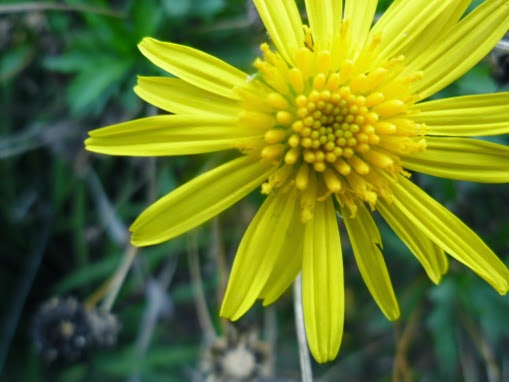 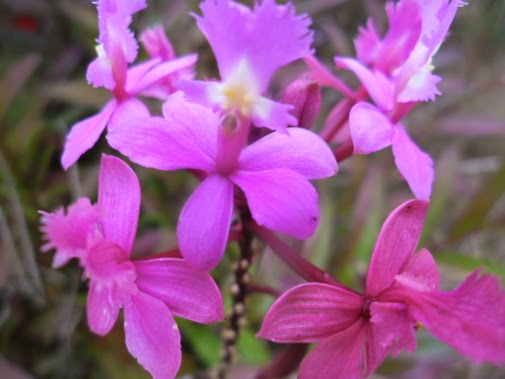 I have managed to finish off my botanica. It now has a backing and hanging sleeve and is ready for the quilt show in September. I have made a collage with some close-ups 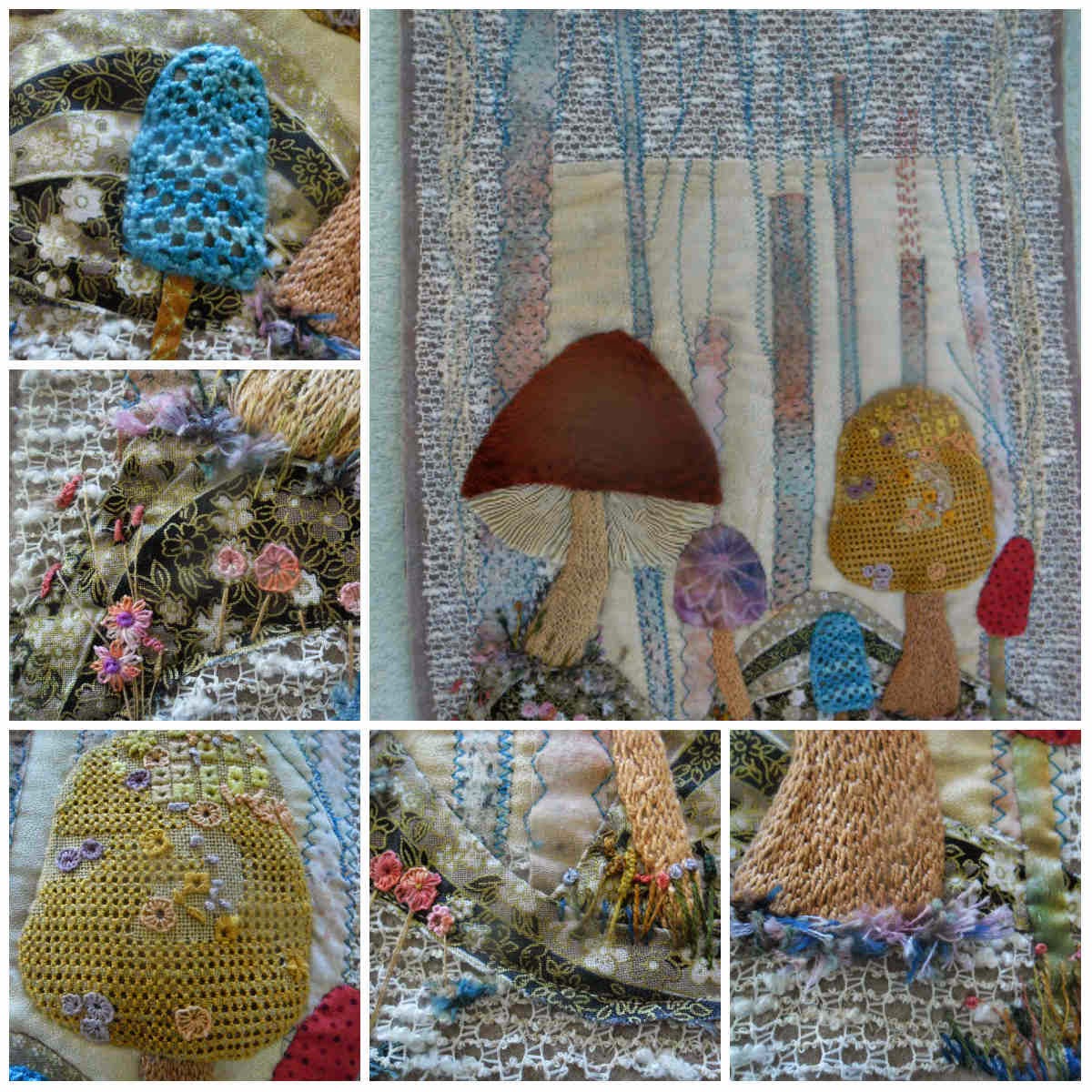 Of course a post about serenity is not done unless there is something about the wallabies.  There are new babies, one just out of the pouch and others on the way.  There is also a new baby rabbit, which sadly was taken by a hawk the day after I took the photo...that is nature for you. 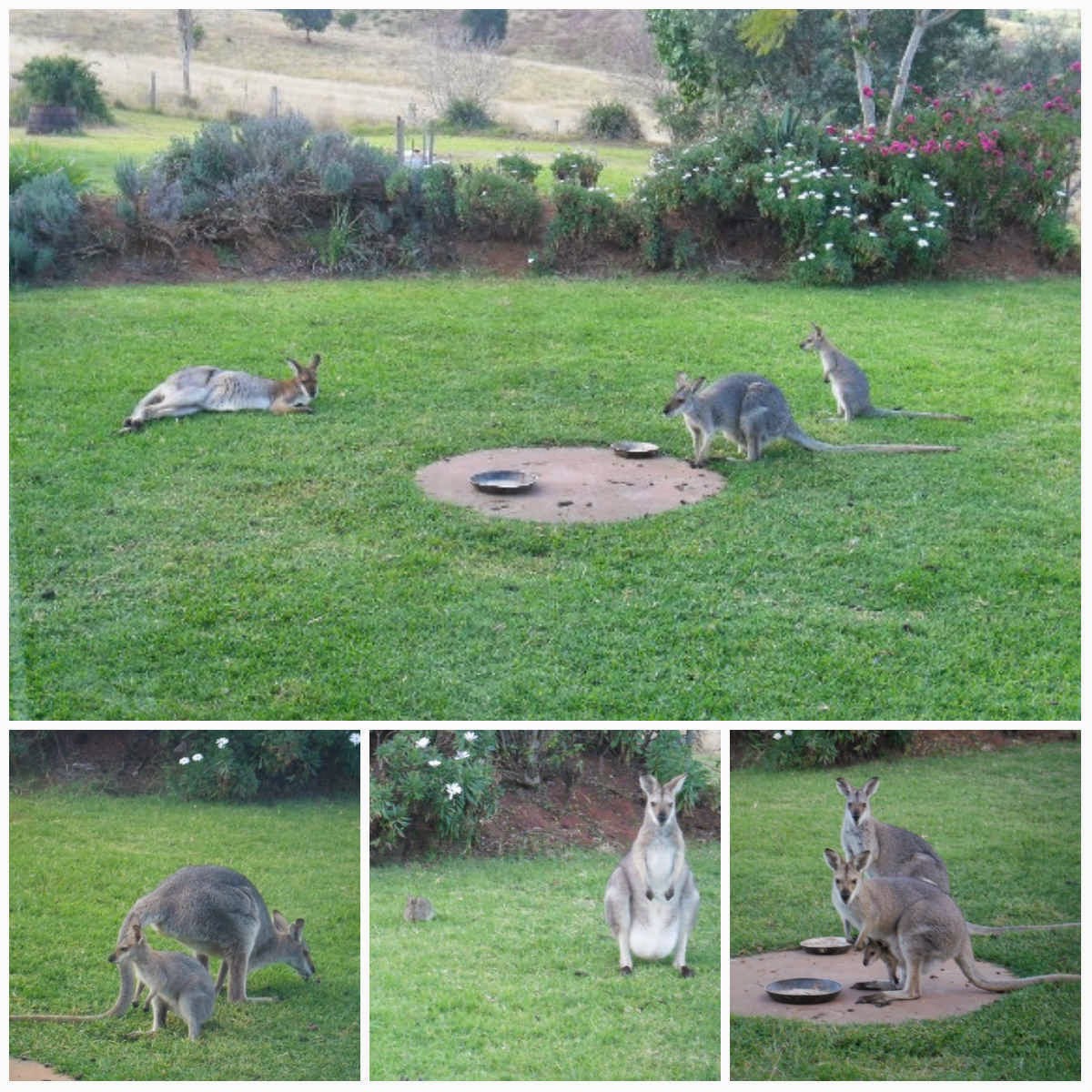 The baby rabbit is in the photo with the mummy in the centre bottom pic.  The main pic has "shorty" who we think is the dad of quite a few of the babies relaxing while mum supervises the newest joey out of the pouch.

I did manage to have a couple of sewing days with my friend, but will keep the results for my next post.


Posted by shirley at 5:01 PM 9 comments: Links to this post

shirley
A great grandmother who likes to stitch 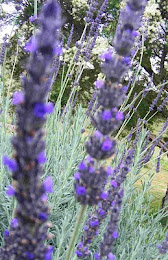 I would really appreciate it if my photos were not shared on Pinterest. Thank you so much Maybe a Cupcake Will Help 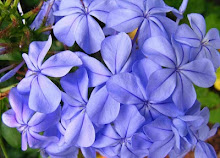